As a gamer, every once in a while I get to play interesting games. Some are quite bad, others are good. SteamWorld Dig definitely belongs to the good ones, and I’m pretty sure almost all of the other reviews or gamer blogs agree.

SteamWorld Dig is an action-platformer games, only available through 3DS eShop. In some respect, it is quite similar (and even compared to) Metroid, added with mining-themed-storyline. However, it doesn’t require accurately-timed button presses, like Castlevania, or even the meme-filled Guacamelee (which is an awesome game, mind you), putting it’s orientation more to the “casual” side of gaming.

SteamWorld Dig doesn’t give a lot of narratives to explain what had happened to the world. As it turns out, you play as Rusty, a robot visiting Tumbletown to inherit his uncle Joe’s mine. As it turns out, Rusty then has to uncover the mysteries surrounding the mine and the bizarre technologies lying underneath it, while at the same time helping Tumbletown to grow. And that’s pretty much the gist of it. The world itself is set in a post-apocalyptic settings, where humans no longer existed (or at the very least, they don’t exist in the game), and it seems that these robots have somehow lost most of the modern technology.

As Rusty, in SteamWorld Dig, you have to explore the mine to uncover it’s secret. As you dig through the mine, the path that you dug previously become a permanent empty space. Essentially, you make your own path of exploration when digging in the mine. You will encounter enemies such as critters, or bomb barrells that will explode if you sits too near, as well as obstacles such as rocks and boulders that can crush you if you accidentally dig underneath it.

You will also find various gemstones that you can take back and sell in Tumbletown, and you can also purchase upgrades with the money you earn by selling the gemstones. Of course, Rusty’s bag is not infinite, so you can only have a limited amount of gemstones before you have to go back and sell them. Most of the common gemstones stack up to 4 (four) stones, while some of the rarer ones such as diamond or ruby will take a space in Rusty’s bag.

Of course, as you dig deeper into the mine, going back and forth from inside the mine back to Tumbletown will consume more of your time, and on top of that, Rusty has a torch/lamp that will lit only for a specified amount of time before it burns out and leaves you in the darkness (you’ll still be able to play in the mine, but it’s quite dark and difficult). The game provides teleporters at certain points, however these are far and few in between. Alternatively, you can also purchase a portable teleporter which you can place anywhere in the mine once, however, this comes at a cost of using a much rarer form of currency, the orbs. 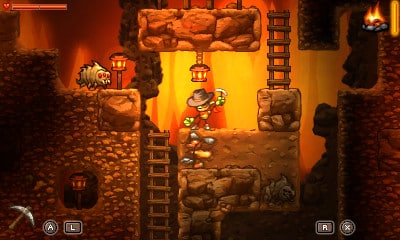 Rusty digging through the mines

Early in the game, Rusty will get the ability to use some of his abilities by using steam power. He also gets to upgrade some of his arsenals such as his pickaxe to a much stronger version, which by the way, is required further down the mine, unless you want to spend minutes trying to clear up a single space. The game uses “upgrades” and the mines as a way to provide you with a sense of progress.

The mines are generated randomly at the start of each playthrough (not each time you enter the mine), and the game itself is quite short (I finished it at around 6 hours). However with randomly generated mines for every playthrough (save for several story-wise mines), it provides a high replayability value for SteamWorld Dig.

We even got zombies in the mines

As you dig through the mines, SteamWorld Dig plays a very thematic songs. The songs really fit into the settings of the game itself, being set in a somewhat westernised ghost town. The sound effects are also useful and distinguishable from one another, and it’s especially useful since when you’re near an enemy that’s been trapped in a dirt, they’ll try to break free and these sounds can be taken as cues. Apart from that, I would have to say that the music is okay, but not great. Good enough for a casual game, that is.

Although SteamWorld Dig has a fairly simple gameplay and can be categorised as a casual game, the graphics are not only good, but great. Granted, they are all in 2D sprites, but coupled with 3DS depth perception, as well as the crisp and colourful palette that fits the story of the game, SteamWorld Dig in my opinion has done a very, very good job in this department. Every environment has a different look and colour combinations to make it distinct from the other environments. The only thing that’s missing is the lack of noticeable upgrades in Rusty’s equipment (my diamond pickaxe still has the same sprite as my old pickaxe).

Overall, SteamWorld Dig is a good-solid game, and can be addictive as well. It provides you with a unique experience, good replayability value, and it doesn’t require much of backtracking to be able to further the story. It definitely belongs to the casual games, but a very polished at that.

SteamWorld Dig is available as a download-only game through the 3DS eShop.