After having your itinerary sorted out, and finally getting into Japan, it is time for some exploring to do. In the next few weeks (or months), I’ll be sharing the famous and not-so-famous-but-worth-visiting spots that we went to when we were in Japan. I’m hoping that this may give you a better view of your trip, and perhaps you may adjust some of the places you’ve scheduled in your itinerary.

Our First Day in Tokyo

Well, if you want to be pedantic about it, it wasn’t really our first day, since we arrived at Tokyo Haneda airport at night around 7.00pm. We rented a room in an apartment in Ichikawa, which is near the border of Tokyo and Chiba prefecture. It takes around 30-40 minutes of a train ride from the Tokyo Central station, depending on your train (express or non-express). By the time we got to the apartment (which was a very nice apartment, by the way), we were already exhausted from the long journey and proceeded to went to bed straight away.

The next day, with our itinerary in hand, we went to the nearest train station, Minami-Gyotoku station. It takes about 10-15 minutes walk from the apartment, and I remember that I felt like locals because there are heaps of people going to the station to go to work as well. The station sits on top of a local marketplace, so we had to get the elevator since we’re bringing a stroller.

As in most developed countries, elevators are normally reserved for those with special needs, such as wheelchairs, prams, strollers, and so on. The only exception is when the elevator is the only method of accessing other levels (such as in Uniqlo Ginza).

Now this “unwritten” rule is pretty common for those coming from Western or developed countries. But if you’re coming from a totally different culture, please don’t be that person who selfishly decide to use the elevator even though you can perfectly use the escalator. 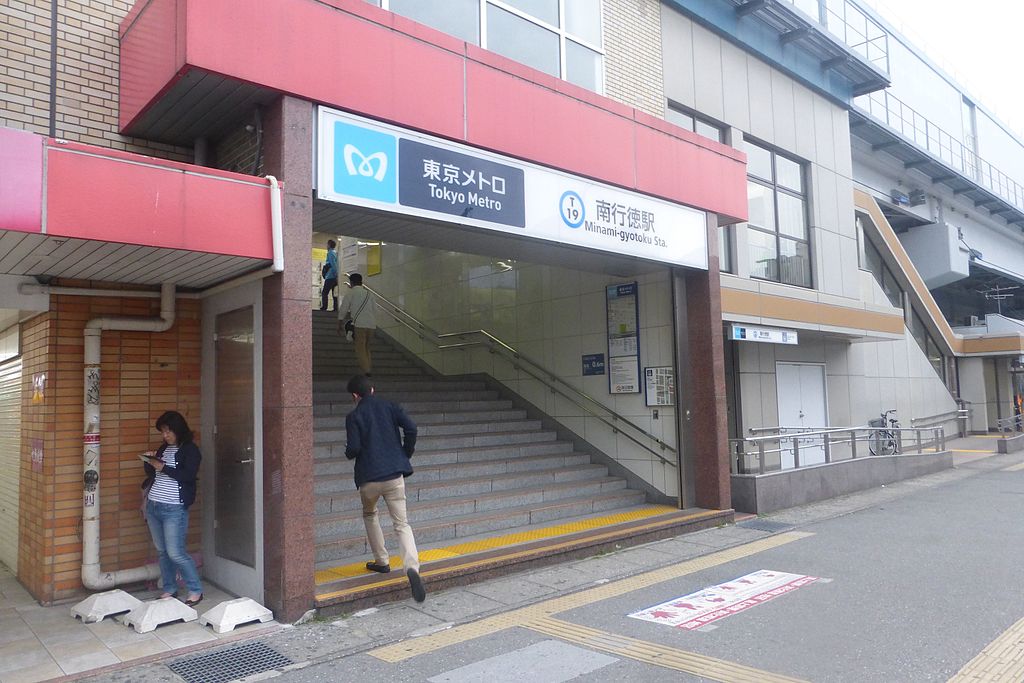 Our destination is now Shibuya station. As I’ve explained in the previous posts, there are a couple of ways for you to buy train tickets:

We’ve decided since the beginning of the trip that we’ll be purchasing the tickets on the spot. This decision was mainly because even though Suica and Pasmo do work in our destinations (Tokyo, Osaka, and Kyoto), we would not be able to get a refund for the unused balance as we were flying out from Osaka. We also did not opt to get a JR Pass, since we will only be travelling one-way via shinkansen from Tokyo to Osaka.

If you have internet access, make sure you use the extremely useful Google Maps on your phone and search for directions to go to your destination. Selecting the public transport/train option will show you the train schedules, along with where you should transfer, as well as a very accurate price of the ticket.

A single trip cost around ¥280 for an adult, and I believe kids under 6 years old travel for free. You might think that we should’ve just used JR Pass in the first place since in the end, the cost would roughly be the same. However, Minami-Gyotoku station is not part of the lines that are being managed by the Japan Railway (or JR) corporation. Instead, it is being managed by the Tokyo Metro company, hence the name of the line is Tokyo Metro Tozai line.

Besides, most of our trip required us to transfer to many non-JR lines as well. For example, we would have to transfer to the [Tokyo Metro] Ginza line in Nihonbashi station to get to Shibuya. And that is only one example. During our time in Osaka and Kyoto, most of the time we did not use JR line trains.

If you are bringing your kids to ride the train, make sure that you remove their footwear before letting them stand on the train seats. This is one of the “unwritten” rule for a lot of Japanese people, and you’ll definitely get eye stares if you don’t do this.

When we arrived at Shibuya station, we got a bit lost. It is true what they say, some of the stations in Japan are like a maze, sometimes it’s difficult to navigate, especially if you’re carrying a stroller. After going out from the station, the Hachiko statue is right there to welcome you. This is when I realised that the spots in the itinerary are actually a lot closer compared to the map.

View from Shibuya crossing towards Shibuya 109 (and yes, that’s an ad for f(x) concert there)

Close to the Hachiko statue is the world-famous Shibuya crossing. We arrived a bit early, around 9.30am in the morning, so the crossing was not as packed as you’d see in movies or YouTube, but there were still a lot of people crossing it. Not far from the crossing is the Shibuya 109 building, a department store chain. There are some cafes inside, but mostly we were there for the nappy/baby change facility.

After walking around in Shibuya, we’ve decided to go ahead to move to our next destination, but not before having lunch. We didn’t know what restaurant chains are safe to go to, because after all it is our first trip, and we didn’t want to have fast food. So we settled for an unknown non-descript ramen place somewhere in Shibuya. It was also my first time using the food-ticket vending machine!

If you want a cheap-but-quite-good eats, try to look for gyudon (literally beef rice bowl) restaurant chains such as Matsuya, Yoshinoya, and Sukiya. Alternatively if you prefer tempura or fried stuffs, there are also tempura restaurant chains, with Tenya being my favourite.

Prices for a single meal tend to range between ¥500 to ¥1,200 depending on how much you order. Some of them also have table seatings (as opposed to the more common counter seatings). You can have as much sauce as you want with your order.

Now that we had had our lunch, it was time for us to continue our trip to the next destination: the quirky Harajuku district.

In the next post (part two), I’ll be sharing the walks on Harajuku, Omotesando, and Meiji-Jingu.