On the previous day we went to Tokyo Skytree, and strolling around Asakusa, mainly in the Senso-ji temple complex. Today we will be going out to Yokohama, which is located around 40km south of Tokyo. We’ll be visiting the famous Cup Noodles Museum, and for parents, the Yokohama Anpanman Children’s Museum.

Yokohama is the second largest city in Japan by population, right after Tokyo. It is located in the Kanagawa prefecture, and is located south of Tokyo. It grew from a small fishing town port into a large commercial hub. Two of the major train stations in Yokohama are the Yokohama station, and Shin-Yokohama station, both served by non-JR and JR train lines.

You can get to Yokohama by traveling on the following lines:

Since the main attractions of Yokohama is in the Minato Mirai district, you will need additional trip to get to Minato Mirai station.

Yokohama’s city center area is called Minato Mirai 21, containing many high-rise towers and malls. It’s located along the seaside, and there are a lot of attractions there. Straight up outside the station is Queens Tower, a business/entertainment building, and from there, it’s just a stroll away to Cosmo World, an amusement park. Going further from Cosmo World, you’ll arrive at a bridge connecting to a small district in which the Cup Noodles Museum is located.

The Cup Noodles Museum is located on the corner of the intersection near World Porters, a shopping mall of sort. The building itself is quite unassuming and you might missed it if you’re not paying attention.

The museum is open every day except Tuesdays and public holidays.

There is an entry fee of ¥500 per person, and as usual children under certain age can be admitted for free. Note that this fee does NOT include additional workshops and activities such as making your own-branded Cup Noodle to bring home.

The Cup Noodles Museum is built to commemmorate Momofuku Ando, the inventor of instant noodles as we know it. Apart from Yokohama, there is another one in Osaka, although it might be a bit more crowded as Yokohama isn’t exactly where tourists go to. I was mentioning to my wife that Momofuku Ando was literally the saviour of every single student studying abroad!

Inside the museum, you can view many noodles-related artwork and sculptures. There is a room filled with instant noodles from every country in the world, including Indomie Mie Goreng! There is also a mini documentary on how Momofuku Ando created the first instant noodles, and how cup noodles became a thing, and how they have managed to create an instant noodles specifically for their Japanese astronauts in space.

There is a shop for cup noodles-related souvenirs. We bought a set of cup noodles fridge magnets, as well as a bag of cup noodles packets to be used on a reusable cup. There’s also a Matryoshka-doll kind-of cup noodle souvenir, but it cost a fair bit so we didn’t get that one.

As much as I like this Matryoshka-doll Cup Noodles, it will set you back around ¥10,000

The children’s museum is open every day except New Year’s day, and there are sometimes areas that are closed off due to maintenance.

There is an entry fee of ¥1,500 per person or child for the museum, with children under 1 admitted free. The shopping mall that is located inside the complex is free admission.

Anpanman is the titular character for the ever-popular children’s anime in Japan, Anpanman. Literally translates to red-bean bun man, Anpanman was created many years ago, with the animated series starting in 1988, and continues to this very day. Aside from Anpanman, there are other bread and buns-themed characters as well. Anpanman is so popular with children and adults alike in Japan, and it’s basically ingrained in their culture. 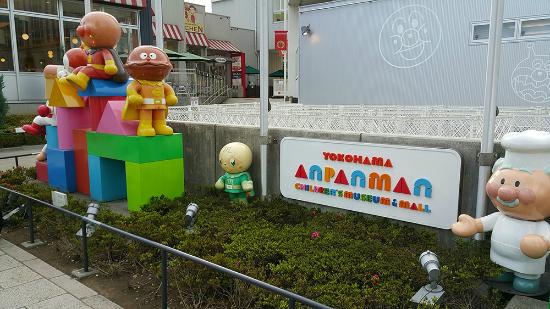 Despite the name, it is not exactly a museum, but rather a playground for children. If you have toddlers and are visiting either Sendai, Kobe, Nagoya, Fukuoka or Yokohama, make sure you stop by Anpanman Children’s Museum so your kids can have the time of their life. I know our son did! At certain times of day, Anpanman will come over to visit the children.

The playground itself is multi-leveled, with certain level containing particular theme. One of the level has a miniaturised version of some of the popular scene in Anpanman anime. The attention to details is just so spot on and unbelievable. There is also an open area outside for shopping few items and souvenirs, as well as bread and buns with Anpanman and other characters’ face. Unfortunately as it was already in the afternoon, some of the shops have closed and we waited in the play area next to the shop, as it was also raining outside. Bun in the shape of Anpanman and other characters [source]

After letting our son play with a lot of things, we went back to Tokyo by train, opting for a quick takeaway in a chain restaurant near our apartment.

And that’s a wrap for our fourth day! Next we will be going to the Disney theme park that is only available in Japan: Tokyo DisneySea.